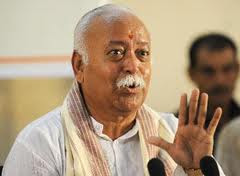 Nobody can imagine India without its culture, philosophy and the Vedas as these make up the soul of the country, RSS Chief Mohan Bhagwat said here today.

"Late Swami Vivekanand had said that so long as religion is alive even in one particle, eliminating India cannot be possible," he said while inaugurating a Ved Vidyalaya at Vrindavan.

"Efforts made to eliminate the country's culture for over 200 years could not succeed as it is deeply-rooted," he said.

Comparing the Vedas with science, Bhagwat said that while the latter has its limitations, the former had none.

Bhagwat suggested that acharyas, saints and academicians should interpret Vedas in a way which would be relevant in different times, situations and places so that "the secret of the welfare of humanity, that India has in the Vedas, could be spread throughout the world".

Meanwhile, when people requested Bhagwat for selfies at the event, he said it was okay to take pictures but, "don't share them on the social media".

"Post photos of our great leaders instead," he said.

"If India has to lead the world in the 21st Century, character building that comes through Vedas is a must," he added.

Email ThisBlogThis!Share to TwitterShare to FacebookShare to Pinterest
ಲೇಬಲ್‌ಗಳು: RSS

The Swami was admitted to the hospital 10 days back. His condition kept fluctuating all these days.

Swami Dayananda Saraswati passed away at his ashram in Rishikesh on Wednesday night. He was 85. He had been ailing for quite sometime.

Born in 1930 in Manjakudi, Natarajan, as the Swami was known in his pre-monastic days, was drawn to Indian philosophy, particularly the Advaita school, listening to Swami Chinmayananda. During the late 1950s and early 1960s, his association with Swami Chinmayananda grew closer as he began taking Vedanta lessons. In 1962, he took ‘Sanyas’ to become Swami Dayananda Saraswati.

He continued his association with Swami Chinmayananda for a long time and the two set up Sandipani Sadhanalaya in the then Bombay to train people in Vedanta.

His contribution there and subsequently with Arsha Vidya Gurukulam saw hundreds of people learn Vedanta, take up renunciation and spread the Vedic message.

Creating teachers in Vedanta along with setting up schools for under privileged under the Aim for Seva Movement were some of his important contributions, says Swami Samananda, one of his disciples from Madurai.

Swami Dayananda Saraswati set up the Acharya Sabha, bringing pontiffs from all over the country on a common platform to take up the cause of Hinduism and debate the challenges it faced. He was also a vocal opponent of religious conversion, calling it assault on faith.

The Swami also took up the cause of Odhuvars. He was also credited with playing an important role in the refurbishment and re-run of the Thiruvidaimaruthur temple car. He had also penned a few verses that have become popular devotional songs.

The Swami was admitted to the hospital 10 days back. His condition kept fluctuating all these days and was finally brought back to his ashram. .

Mr. Modi called on the Swami at his Ashram to enquire about his health on September 11.

(With additional inputs from PTI)